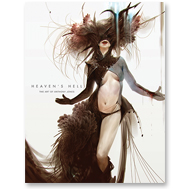 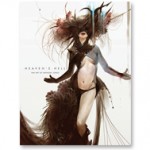 The afterlife—a place that fills our hearts and minds with wonder as well as dread. What is in store for us there? Will there be suffering or redemption for our souls, or both? Who or what holds the power in the afterlife? And is there no escape?

Heaven’s Hell: The Art of Anthony Jones unveils one artist’s exploration of this shadowy realm and the beautiful and haunting beings battling over it. Meet the sultry and fearless sisters of Haliled, the scheming Crimson and Sapphire Sages, and the mighty brothers of Jisais—all of whom don the most sensual, imaginative attire—drawn and painted in striking detail that will captivate curious minds. Jones’s artwork is undeniably provocative and unsettling simultaneously—this effect is ultimately his intention—for the afterlife holds as much mystery as it does terror: it is both heaven and hell.

Anthony Jones has worked as an artist in the entertainment industry since 2008. He has worked for several notable companies over his career, including Sony, Blizzard Entertainment, Paramount, Western Costumes, Applibot, Wizards of the Coast, and Hasbro. But he is most proud of his role as a teacher, helping aspiring artists finesse their skills, as well as providing them a venue where they can showcase their work, through his company, Robotpencil.