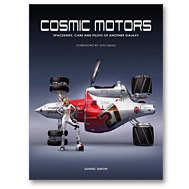 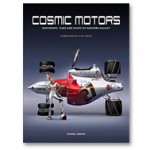 “Daniel Simon has an amazing mind that not only conceives startling designs but has the critical skill to translate those designs into stunning imagery.” – Syd Mead, Visual Futurist

Come explore the vehicle designs of a far away galaxy called Galaxion where futuristic concepts exist in everyday life. Nine different spaceships, pods, race cars, giant trains, warships and balloons from various planets of the Galaxion system are shown from concept to completion.

Daniel Simon is an established car designer who has spent the last several years focusing his talents on futuristic concepts for such automakers as Bugatti and Lamborghini. In his first book, Cosmic Motors, each chapter shows the design process of a unique vehicle, from the first ideation sketches to the stunningly detailed 3-D models to the final photorealistic full spread renderings. Join Daniel in this virtual world of visionary vehicles!

Categories: Books, sorry you missed us // out of print. Tag: daniel simon.